For Martin Brittain at Freshgro it’s all about flavour. Back in 1999 he and his colleagues started searching for a carrot variety that would be defined purely by taste rather than volume, shelf life, cosmetic appearance or any of the other criteria that seemed to be prevalent at the time. They scoured the world, tasting hundreds of different carrots till they settled on a variety of Chantenay that fitted the bill. Since then careful selection has continued to improve this variety so that nowadays Freshgro’s Chantenay are available for most of the year and always taste like a carrot really should.

Sequential sowing from October to June means that Chantenay can be harvested from June all the way through to October. After that they are covered with straw and stored in the soil to provide supplies right through till May. During the storage period the carrots are continually reassessed to make absolutely sure that quality and flavour are always as good as they should be.

As well as orange Chantenay Freshgro discovered two other varieties when they were scouring globe, white and purple. They trialled the white variety in 2012 and got a fantastic reception so they launched purple Chantenay the following year to equal acclaim. All three versions are now readily available and really do taste as good as they look.

If you’re looking for real carrot flavour then you’ve got to go for Chantenay. 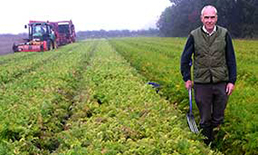 Total Produce get us to places we couldn’t otherwise reach. Total’s great coverage make sure that our Chantenay get into professional kitchens and to the chefs who want to put them on their menus.