Martin Griffiths had an early start  growing vegetables. When he was still at school he supplemented his pocket money by growing carrots and swedes. Now he‘s one of the very best brassica growers in South Wales.

What really sets Martin apart is that he raises over 95% of his vegetables from seed unlike most growers who buy in young plants from specialist nurseries. At his farm in near Haverfordwest in Pembrokeshire he grows over a million and a half plants a years. Martin’s insistence on overseeing the whole process himself is one of the reasons that his produce is so outstanding.

Plant raising and growing are two entirely separate skills but Martin learnt both when he was at agricultural college. He also spent two years working with Wales’ chief agronomist visiting, and working with, produce growers across Wales.

In the early 90’s Martin started working on the family farm full time. Back then it was mostly dairy but changes in milk quota policy and the end of the Milk Marketing Board had made dairy farming very tough for smaller farms. Martin began to expand the veg side focusing on growing brassicas for the independent wholesale markets. Martin’s unswerving commitment to quality has really paid off, so much so that chefs across Wales build their seasonal menus round his produce. 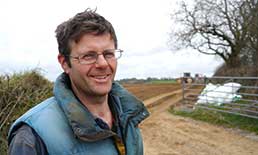 “I work exclusively with Total Produce because they’re so reliable. They take guaranteed volumes at set prices and payments are always on time. They’re very flexible taking anything we grow and they work closely with us to help develop new lines that they know their customers will want.”