The Smedley family have been growing apples at Four Elms Fruit Farm near Sidmouth in Devon since the early sixties.

Today Four Elms Fruit Farm is run by Richard, Sue and their son Mark. They grow over ten varieties of apples, all of exceptional quality. The harvest starts in August and finishes in November. First off the trees are Discovery and the Devon Bramley with its distinctive red blush. The harvest finishes in November with the last of the Braeburns. Careful storage means that Four Elms apples are available till well into the following year, usually until March.

The Smedley family also produce a range of superb, single variety apple juices using only their own fruit, a kilo of apples for every 75cl of juice. We’d need another page to list all the awards and accolades their wonderful juices have won but these include most of the top awards from both Taste Of The West and The National Fruit Show several years running.

Brothers Peter and Jonray Sanchez-Iglesias own and run the renowned Casamia restaurant in Bristol. They’ve held a Michelin star for five consecutive years and are The Good Food Guide joint Chefs of the Year for 2015.

They run four menus a year rooted in the seasons. Three varieties of Four Elms apples feature on their 2015 Autumn menu. 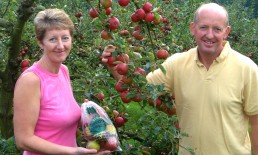 “We’ve been dealing with Julian Scott at Total Produce for 5 years and I can only praise his dedication and commitment. Growing apples is not an easy occupation and neither is selling them and Julian has always worked outstandingly well for us”.