New Cross Farm has been a specialist fruit farm since 1948 and current owners William and Liz Hebditch are the second generation to grow there.

New Cross is a  170 acre farm that lies on the first set of hills to the south of the Somerset Levels, a very beautiful part of the world and fortunately high enough not to be affected by recent flooding. As William says they grow a ridiculously large range of crops including rhubarb, green and red gooseberries, raspberries, cobnuts, red and blackcurrants, 25 acres of plums and 20 acres of apples. They also grow several varieties of cherries including the Morello most of which are destined for Julian Temperley at the nearby Somerset Cider Brandy Company (although William does let us have a few cases during the very short season).Here they are made into a liqueur, a top notch cherry brandy, and the Hix Fix, the favourite cocktail at all Mark Hix’s restaurants.

As well as all of this William and Liz somehow find the time to grow 15 acres of superb asparagus. Traditionally the British Asparagus season starts on St George’s Day, 21st April, but climate, canny growing and the judicious use of a Greek poly-tunnel system means that New Cross Asparagus is usually in full flow a fortnight earlier. Very good news for us all. 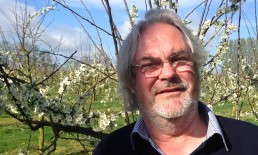 “I’ve been dealing with Julian Scott at Total Produce for a long, long time. The great joy and delight of dealing with Total is the development of trade with specialist restaurants who all want the local produce that we grow for them.”