Ayrshire Early potatoes are one of the UK’s greatest, if least known, culinary treasures.

Perhaps the best of these is the Epicure first introduced to Ayrshire in 1897 by horticulturist James Clark. The Epicure is a true gourmet spud with its distinctive white skin, creamy flesh, deep eyes and outstanding flavour.

Ayrshire is one of the most fertile regions of Scotland and has near perfect  conditions for growing potatoes, particularly near the coast.  There’s a mild maritime climate thanks to the Gulf Stream, rich sandy soil with a touch of salt from the sea and plenty of seaweed, a traditional fertilizer.

William Jack has been growing potatoes on the Ayrshire coast, just across from the Isles of Arran, for thirty five years.  He plants in February just as soon as it’s dry and starts harvesting the first Ayrshire Earlies in May.  Originally the crop was lifted by hand, back breaking work, but mechanized harvesting was introduced twenty years ago. The potatoes are dug every day and in the markets within 24 hours, freshness is vital for maximum flavour.

Ayrshire Potato Growers are applying for European PGI status which, if successful, just might finally give these wonderful spuds the recognition they deserve. 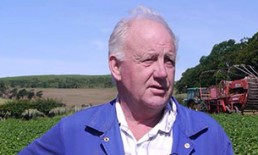 “We’ve been dealing with Total Produce for many years and always found them very fair customers. What Total do for us is get our potatoes to our local customers right across the region”.